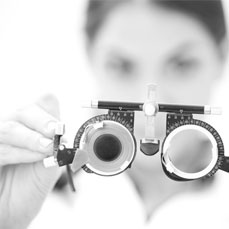 Perhaps you have just learned that you or a loved one has age-related macular degeneration (AMD). Herewith follows a general overview of AMD. Dr. Burger would be the best person to answer specific question. 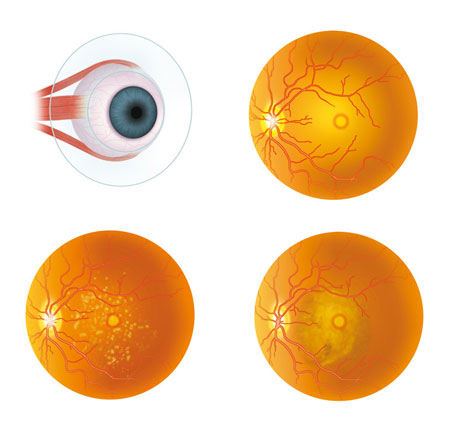 What is Age-related Macular Degeneration - AMD?

AMD is a common eye condition which affects people age 50 and older.

It does not cause blindness, but may cause loss of central vision. Your peripheral field of view will be preserved, which will help you with amongst others, navigation.

As the name implies, it is an Age related (related to the ageing process), Degenerative process (break down and/or loss of cells) of the Macula AMD. The macula (small central part of the photographic film of the eye called the retina)is responsible for "day time vision", the area responsible for sharp, central vision, which lets us see detail and objects that are straight ahead. AMD will affect central vision which causes difficulty with facial recognition, reading, writing, driving and difficulty to do close work, such as cooking or fixing things around the house.

In some people, AMD advances so slowly that central vision loss does not occur for a long time. In others, the disease progresses faster and may lead to a loss of central vision in one or both eyes. As AMD progresses, a blurred area near the centre of vision is a common symptom. Common presenting symptoms would be the following:

What is the Macula?

The macula is made up of millions of light-sensing cells that provide sharp, central vision. It is the most sensitive part of the retina, which lines the inside of the eye.

When the macula is damaged, the centre of your field of view may appear blurry, distorted, or dark. It does not affect your peripheral visual areas.

Risk factors for AMD include:

How is AMD detected?

The early and intermediate stages of AMD usually start without symptoms. Only a comprehensive dilated eye exam by an Ophthalmologist such as Dr. Burger, can detect AMD. Sometimes it may be picked up by an Optometrist.

There are three stages of AMD defined in part by the size and number of drusen under the retina. It is possible to have AMD in one eye only, or to have one eye with a later stage of AMD than the other.

There are two types of late AMD:

Dry AMD– also called geographic atrophy. There is a gradual breakdown of the light-sensitive cells in the macula that convey visual information to the brain, and of the supporting tissue beneath the macula. These changes cause vision loss.

Wet AMD also called neovascular ("new vessels") AMD. Abnormal blood vessels grow underneath the retina and can leak fluid and/or blood, which may lead to swelling and damage of the macula. The damage may be rapid and severe, unlike the more gradual course of geographic atrophy. It is possible to have both geographic atrophy and neovascular AMD in the same eye, and either condition can appear first.

AMD has few symptoms in the early stages, so it is important to have your eyes examined regularly. If you are at risk for AMD because of age, family history, lifestyle, or some combination of these factors, you should not wait to experience changes in vision before getting checked for AMD.

Not everyone with early AMD will develop late AMD.

For people who have early AMD in one eye and no signs of AMD in the other eye, about five percent will develop advanced AMD after 10 years. For people who have early AMD in both eyes, about 14 percent will develop late AMD in at least one eye after 10 years. With prompt detection of AMD, there are steps you can take to further reduce your risk of vision loss from late AMD.

How is AMD treated?

Currently, no treatment exists for early AMD. Consider lifestyle modification if indicated and visit your Ophthalmologist for annual checkups.

You might be able to reduce your risk of AMD or slow its progression by making these healthy life style choices:

Researchers found that daily intake of certain high-dose vitamins and minerals can slow progression of the disease in people who have intermediate AMD, and those who have late AMD in one eye. (AREDS and AREDS2)

The AREDS1 trial showed that a combination of vitamin C, vitamin E, beta-carotene, zinc, and copper can reduce the risk of late AMD by 25 percent. The AREDS2 trial tested whether this formulation could be improved by adding lutein, zeaxanthin or omega-3 fatty acids. Omega-3 fatty acids are nutrients enriched in fish oils. Lutein, zeaxanthin and beta-carotene all belong to the same family of vitamins, and are abundant in green leafy vegetables.

Here are the clinically effective doses tested in AREDS and AREDS2:

If you smoke regularly, or used to, Dr. Burger may recommend that you avoid supplements containing beta-carotene.

The AREDS formulation is not a cure. It does not help people with early AMD, and will not restore vision already lost from AMD. But it may delay the onset of late AMD. It also may help slow vision loss in people who already have late AMD.

Neovascular AMD typically results in severe vision loss. This can occur suddenly. Dr. Burger can try different therapies to stop further vision loss. You should remember that the therapies described below are not a cure. The condition may progress even with treatment.

Anti-VEGF injection therapy blocks this VEGF and thus inhibits new vessel formation. You may need multiple monthly injections. Before each injection, your eye will be numbed and cleaned with antiseptics. To further reduce the risk of infection, you may be prescribed antibiotic drops. A few different anti-VEGF drugs are available.

Rarely, Photodynamic therapy and laser may be used. These procedures are not as effective as the anti-VEGF injections, and is often used in combination with them for specific types of neovascular AMD.

Coping with AMD and vision loss can be a traumatic experience. You may not be able to restore your vision, but low vision services can help you make the most of what is remaining. You can continue enjoying friends, family, hobbies, and other interests just as you always have. The key is to not delay use of these services. Remember, help is available and Dr. Burger can assist you in this regard. Useful visual aids, include:

Reading glasses with high-powered lenses
Handheld magnifiers
Video magnifiers
Computers with large-print and speech-output systems
Large-print reading materials
Talking watches, clocks, and calculators
Computer aids and other technologies, such as a closed-circuit television, which uses a camera and television to enlarge printed text.

AMD and vision loss can profoundly affect your life. This is especially true if you lose your vision rapidly. Even if you experience gradual vision loss, you may not be able to live your life the way you used to. You may need to cut back on working, volunteering, and recreational activities. Your relationships may change, and you may need more help from family and friends than you are used to. These changes can lead to feelings of loss, lowered self-esteem, isolation, and depression.

In addition to getting medical treatment for AMD, there are things you can do to cope:

Learn more about your vision loss.
Visit a specialist in low vision and get devices and learning skills to help you with the tasks of everyday living.
Try to stay positive. People who remain hopeful say they are better able to cope with AMD and vision loss.
Stay engaged with family and friends.
Seek a professional counselor or support group. Your doctor or eye care professional may be able to refer you to one.
Shock, disbelief, depression, and anger are common reactions among people who are diagnosed with AMD. These feelings can subside after a few days or weeks, or they may last longer. This can be upsetting to family members and caregivers who are trying to be as caring and supportive as possible.

Obtain as much information as possible about AMD and how it affects sight. Share the information with the person who has AMD.
Find support groups and other resources within the community.
Encourage family and friends to visit and support the person with AMD.
Allow for grieving. This is a natural process.
Lend support by “being there."